Stamps, coins, and clover lead to sand and sea beans 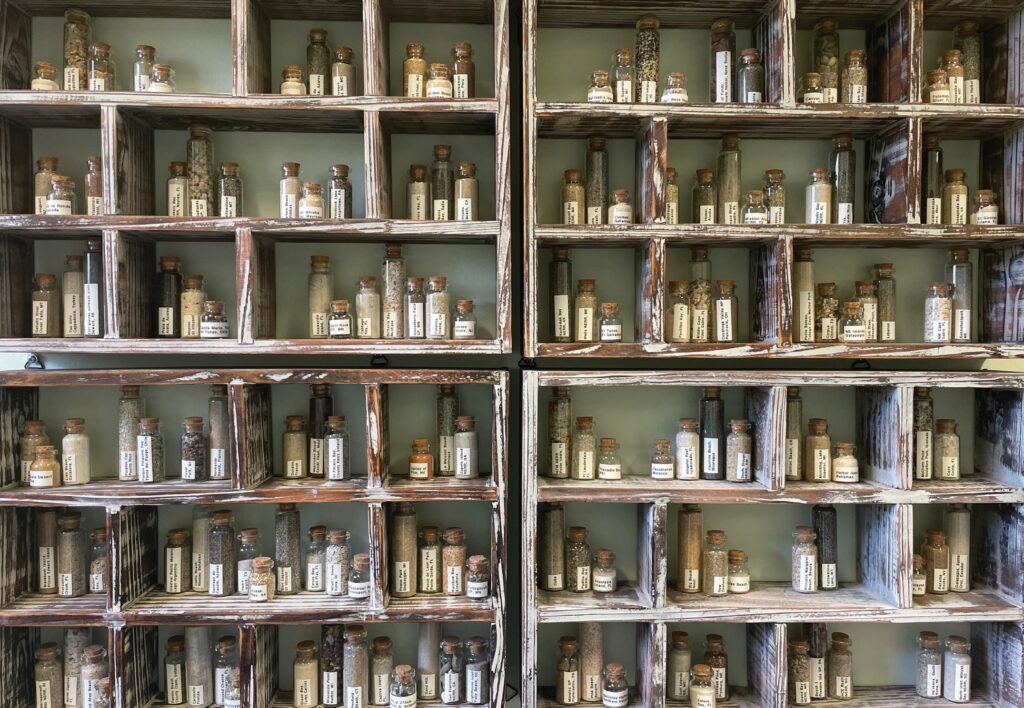 Ms. Falkowski has collected about half of her sand samples on her travels; others have been gifted by friends and colleagues. COURTESY PHOTOS

Like many children, Sarah Falkowski had a coin collection, stamp collection, and rock and mineral collection. They sit fondly in her childhood bedroom at her parents’ home up north.

“The older I get, the more I’m glad I’ve kept them and that my parents allowed me to keep them in a house I haven’t lived in for a long time,” Ms. Falkowski says. She considered half-dollar coins “really cool and gigantic” as a child, loved finding $2 bills that are rarely given as change from a purchase these days, and started collecting uncirculated stamps because Grenada issued Disney-themed postage.

While coins, stamps and rocks are pretty traditional collections, Ms. Falkowski eventually graduated to acquiring some unusual items. These days, she treasures her collections of four-leaf (and higher) clovers, sand from around the world, sea beans that have floated to Florida shores, and even an antique tree snail shells display.

The sands of time 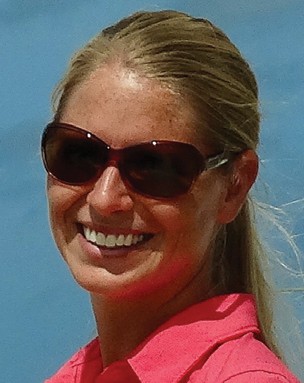 Ms. Falkowski, who works as the education coordinator for the Rookery Bay National Estuarine Research Reserve in Naples, inherited a 10-sample sand collection when she began teaching the Florida Master Naturalist Coastal Systems class. The previous instructor used the samples from various Florida beaches to show how sand throughout the state doesn’t all look alike.

“I was amazed at how delighted people were to see sand from the east coast, west coast, Keys and Northern Florida,” Ms. Falkowski says.

She began adding to the collection, starting with sand from within the 110,000-acre Rookery Bay Reserve, which encompasses 40 percent of Collier County’s coastline and stretches from Keewaydin Island through the Ten Thousand Islands and Western Everglades.

“Even within Rookery Bay, the sand looks different,” she says.

Around the same time she started working on this collection, attendees of the 2010 National Estuarine Research Reserve Association conference were asked to bring sand from their reserve for a sand swamp. Ms. Falkowski came home with 27 baggies and realized she needed a better way to keep and showcase the sand. 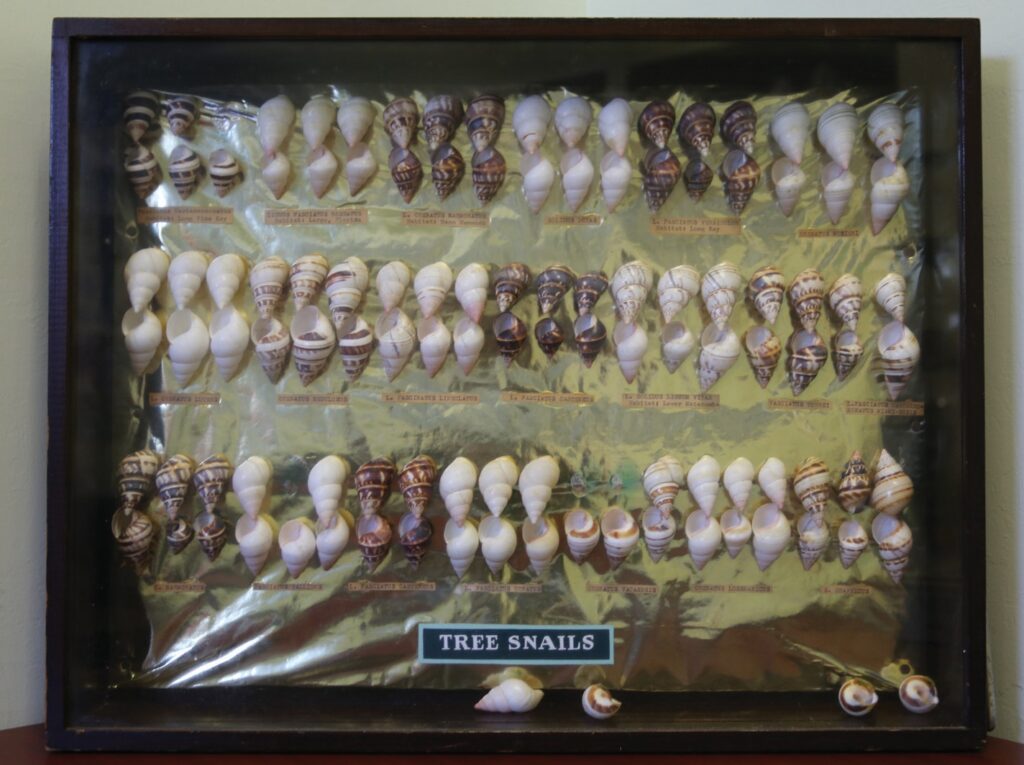 She decided to use small vials and to display them on a shelf in her office, where staff, volunteers, visiting scientists from around the world, and education program participants could see them. This decision helped the collection grow to its current 157 samples from 31 states, 28 countries, and seven continents.

“People bring me sand from their travels,” Ms. Falkowski says. “Frequently, I have sand on my desk in some sort of foil wrapper that goes around a tea bag or a Tic Tac box that has a location written on it. There are times I don’t even know who left it.”

She’s acquired about half of the sand herself.

One of her favorite collecting sites was the island of Mopion, an uninhabited islet in the Caribbean that she says is often featured in movies. “It’s a typical Caribbean blue with a tiny spot of sand and a crooked palm tree,” she says. “Going there was really spectacular.” 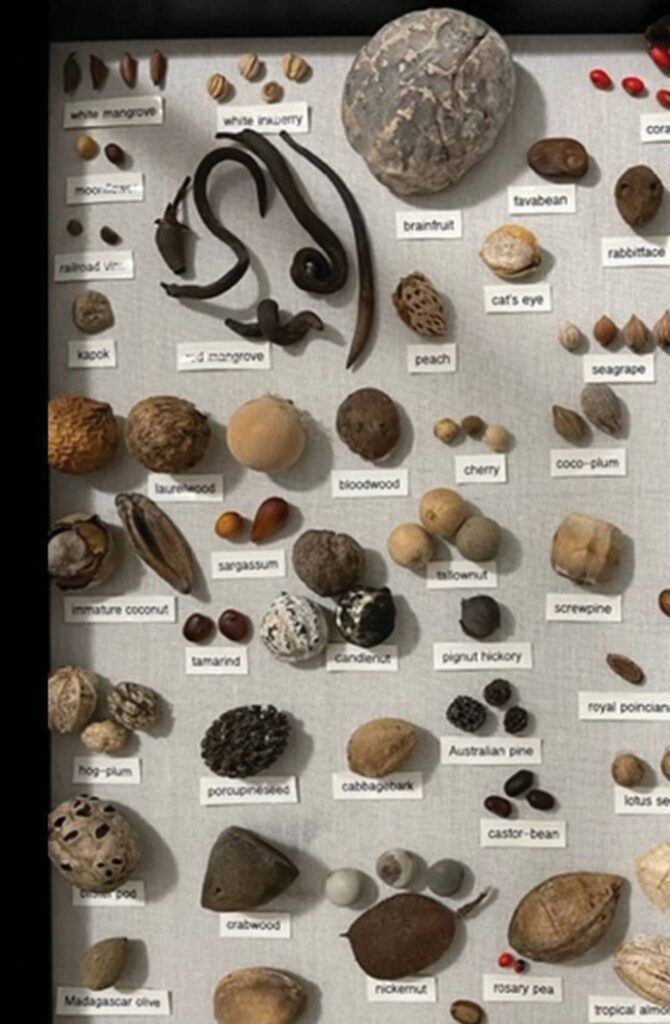 Some of Ms. Falkowski’s sea beans are on display at the Rookery Bay Environmental Learning Center through Oct. 28.

She also has sand from Presque Isle State Park, a 3,200-acre sandy peninsula in Pennsylvania, her home state. She has rocky red sand she collected from the Bay of Fundy in Nova Scotia, black sand that a friend brought back from Saba, and an orange, brown and yellow hued sand that another friend got in the Sahara Desert.

Surprisingly, she even has sand from the Larsen Ice Shelf in Antarctica. It was taken from a core drilled about eight feet deep by a friend conducting research there to study sediment under the ice.

What she doesn’t have is the sand she intended to bring home from El Salvador but that didn’t make it through customs. Ironically, when she unpacked once home, she had sand in her flip flops that she managed to put into a vial.

She has sand from Lebanon and Turkey but would like more from Asia. She also has only one sample from Oceania — it’s from New Zealand — but has a friend going to Australia and Madagascar, so she’s hopeful there will be sand for her after that trip. 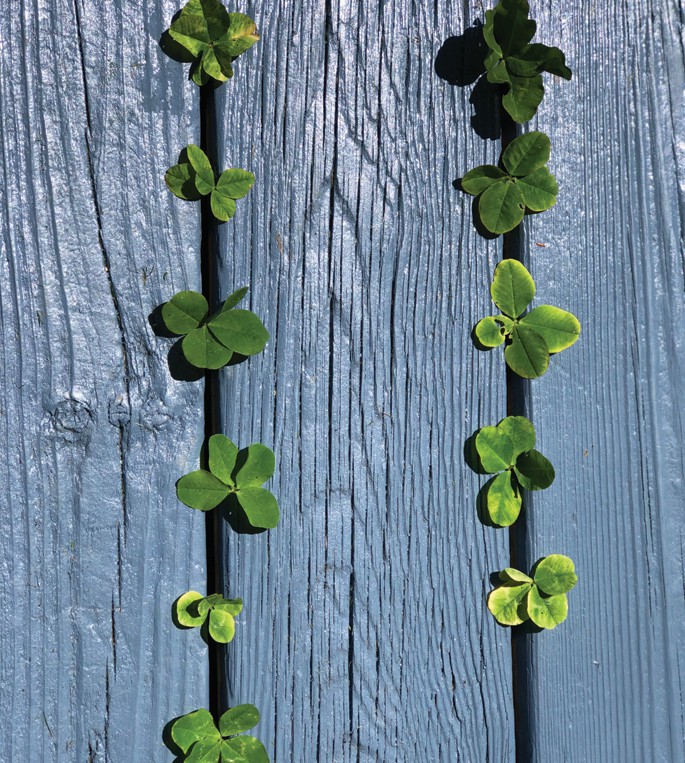 Sea beans born on the tides

A true nature lover, Ms. Falkowski attended the International Sea Bean Symposium in the early 2000s to learn more about these seeds that can drift thousands of miles away from where they originated. The group met in Cocoa Beach on Florida’s east coast, where the novice Ms. Falkowski won the Bean-a- Thon contest by collecting 30 species in two hours of beachcombing.

“I’ve been back many times and never won again,” she laughs.

Ms. Falkowski says many sea beans originate in the tropics, but she also has sea beans from Florida’s many plants.

“I like the mystery. They can float for years before you find them. I think about how far they’ve gone. It’s like the ‘message in a bottle’ phenomenon.” 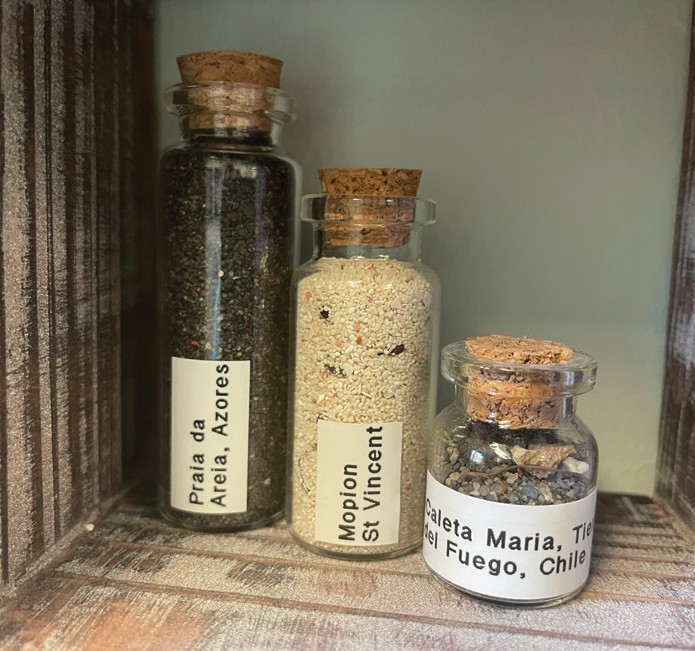 Three of Sarah Falkowski’s 157 samples of sand collected from around the world. COURTESY PHOTO

She has more than 60 sea beans and put some of her favorites — including a nickernut, a star nut palm, and a hamburger bean that looks like a toy hamburger — in a display case as a pandemic project. The case is on exhibit at the Rookery Bay Environmental Learning Center through Oct. 28 as part of a staff and volunteer art show.

Ms. Falkowski finds sea beans in the wrack line — where items are deposited at high tide — and says storms with high winds bring larger sea beans ashore. She says barrier islands like Keewaydin are good spots to find sea beans, but there’s more variety on Florida’s east coast. She also found about 10 types in Hawaii, since it’s in the middle of the ocean and many things drift there.

She has found a rare sea heart but continues to search for the highly coveted Mary’s Bean.

When a family wanted to donate an antique collection of tree snail shells many years ago, Ms. Falkowski was quick to become its steward and keep it in her office. While she didn’t collect them — this would be illegal to do today — she is happy to have such unusual specimens to share as part of her job.

“It’s very unique and old,” she says, noting that the scientific names on many of the labels are no longer accurate.

“They were definitely collected in South Florida.”

Tree snails live on islands in the cypress swamps and don’t move from island to island, so they are vulnerable if something happens to their island. There are about 20 species and four to six of each type in the collection. Many are now extinct, she says.

Growing up on her parents’ farm in Pennsylvania, Ms. Falkowski often found four-leaf clovers that she pressed between the pages of the Sears catalogue and then mounted in a photo album. She even has about 20 clovers with five, six, and even seven leaves.

“I’ve only ever found (four-leaf clovers) in rural, Northwestern Pennsylvania where I grew up,” she says. “The sod here in Florida unfortunately doesn’t have them.”

She continues this hobby today and was happy to find about 200 while working from the family farm during the pandemic. “It doesn’t take long for me to spot one,” she says. “I walk a lot with my dog and kind of just see them as we adventure in the fields at my dad’s farm.”

The farm — where she grew up and spent so much time playing outside — has been the inspiration for Ms. Falkowski’s life as well as for her collecting hobbies. Although you can take it to any level, she says, “Collecting can be simple and low-cost,” she says. Not a bad way to live life in general. ¦

3 responses to “A collector’s life”