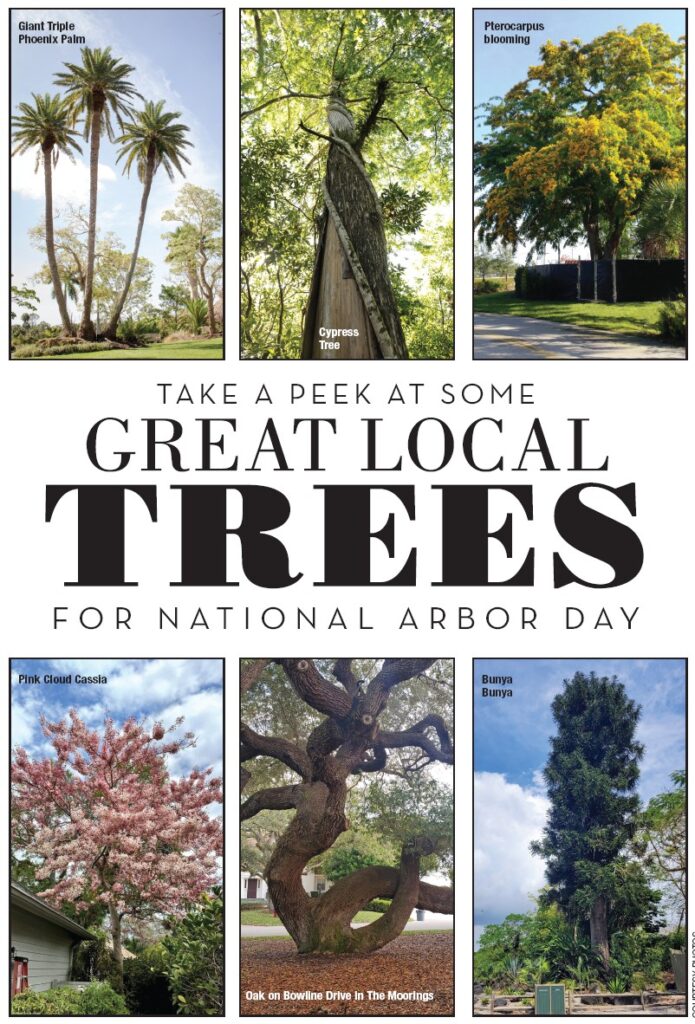 s the country celebrates the 150th anniversary of National Arbor

Day on April 29, we take a look at noteworthy trees around

The City of Naples has been designated a “Tree

City USA” for the past

25 consecutive years, received the “Tree City USA Growth Award” for 15 years, and was recognized as a “Tree Cities of the World” for the past two.

The City of Naples Urban Forest has more than 20,000 trees on public property, with 30% of the city covered by tree canopy. A Southern live oak at the corner of Bow Line Drive and Bow Line Bend that is estimated to be 100 years old is particularly noteworthy.

“That is by far my absolute favorite tree,” says Heather Shields, arborist and project manager for the City of Naples. “It is just so cool the way that it has grown and twisted.”

Ms. Shields also points out a shaving brush tree in Fleischmann Park that just finished blooming and a powder puff tree with an unusual man-made woven bark that she installed in the median of U.S. 41 near Mooring Line Drive about five years ago. 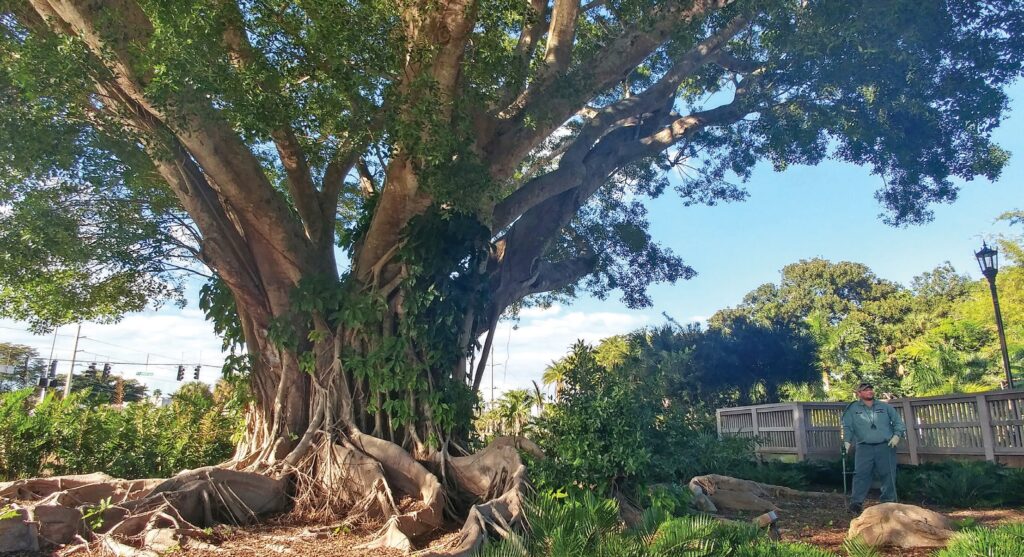 The City of Naples keeps an interactive tree inventory map on its website.

A royal palm in Fakahatchee Strand State Park is on the National Register of Champion Trees. When measured in 2012 for this nomination, the tree was 82 feet tall.

A myrtle oak at Naples Preserve had been on the list but did not survive Hurricane Irma.

Thomas Becker, residential horticulture agent for UF/IFAS Extension Collier County, says visitors from outside Florida like seeing tropical-looking trees with large sprays of flowers. He includes the Brazilian red cloak on that list, saying, “It is undoubtedly showy and makes a dramatic addition to any landscape.” 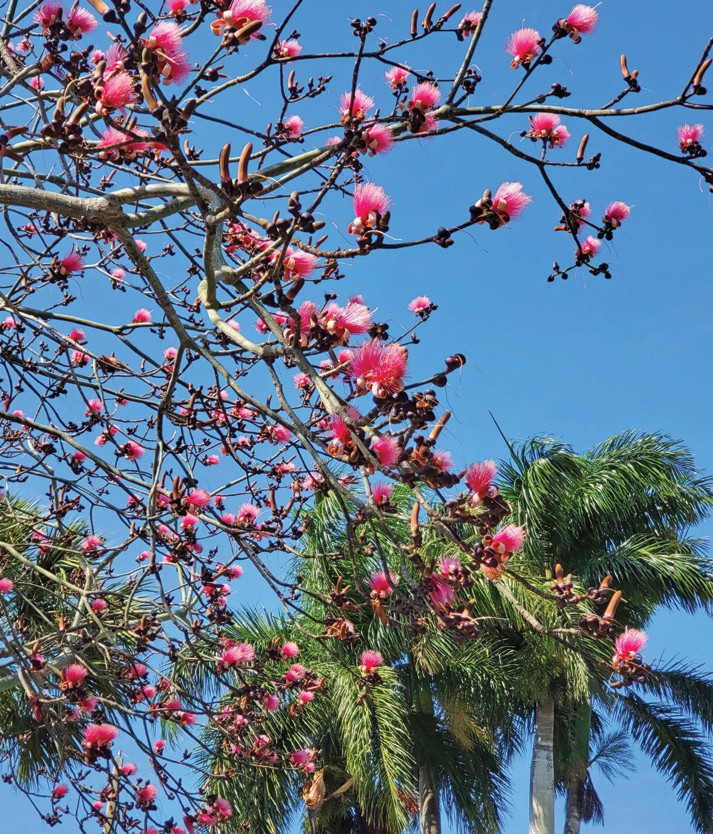 Mr. Becker says the pink cloud cassia and seagrape are other standouts locally.

Corkscrew conserves more than 13,000 acres, including the world’s largest remaining old-growth bald cypress forest. These trees are estimated to be more than 500 years old, with 60 “giants” having a circumference of 17 to 24 feet.

Visitors can go along 2.25 miles of boardwalk through the ancient forest and marsh habitat. Signs identify 12 “special” bald cypress that tell stories, such as the “Calusa Tree” that explains how the Calusa used cypress trees to create their dugout canoes. 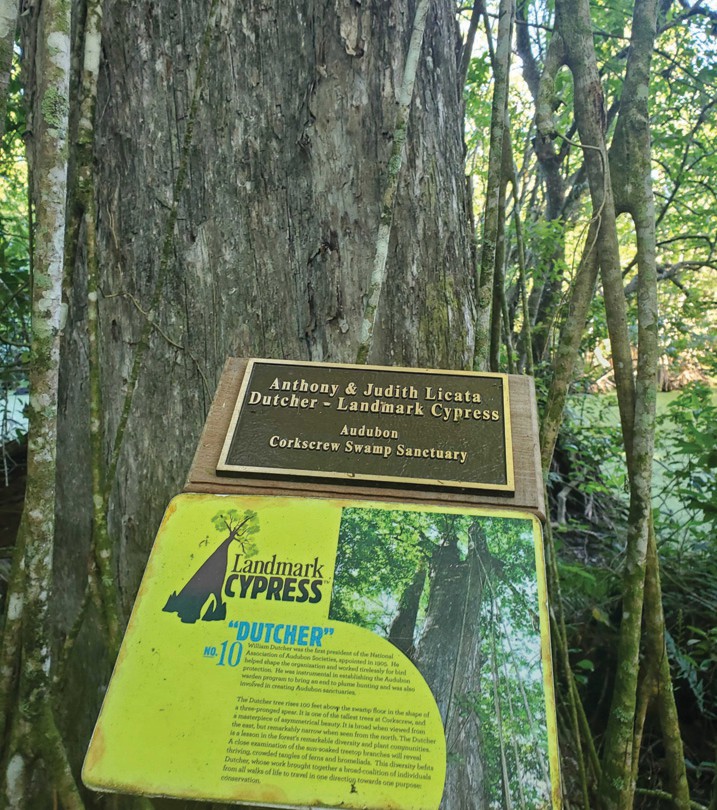 When Naples Botanical Garden was being created in 2008, the area was cleared of many invasive specimens and left with a few royal poincianas, figs (also known as banyans), and some red and black mangroves.

So, garden staff turned to the community.

“We really scoured the town,” says Brian Galligan, vice president of horticulture. “Being plant nerds with a yearn for the unusual, we knew where the great trees were.”

They took red kapok, seagrape, and strangler fig from where Isles of Collier Preserve was built.

When an apartment complex across from the garden was being torn done, they rescued three silver tabebuia that were at least 40 years old. Those trees now sit in the Orchid Garden. 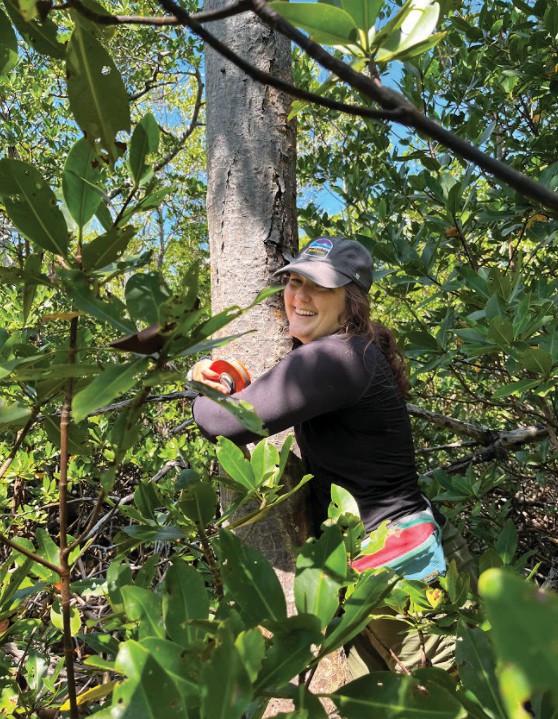 They took a bottlebrush from where St. George and the Dragon restaurant was downtown, and a huge tabebuia and a triple date palm from Club Pelican Bay.

The garden was also the beneficiary of more than 100 palms from multiple trees planted 40 to 50 years prior by collector Bob Fuller and his brother.

With persistence, Mr. Galligan knocked on the door of a house on Granada Boulevard every time a new owner moved in. He wanted their massive palm tree. The third try proved successful.

Being scavengers has definitely paid off for the garden.

“We were able to form some pretty incredible gardens with salvaged plants,” Mr. Galligan says of the garden’s roots.

This 110,000-acre national estuarine research reserve encompasses 40% of Collier County’s coastline, stretching from Keewaydin Island through the Western Everglades. It is one of the last remaining undisturbed mangrove forests in North America.

Growing in coastal waters, mangroves act as barriers that protect inland areas during storms and are important animal habitat.

Naples Zoo incorporates land purchased in 1919 by Dr. Henry Nehrling, a noted botanist, who had about 3,000 species of tropical plants on the property by 1925. According to zoo history, this was one of the earliest plant collections in Florida.

Many of Dr. Nehrling’s trees can still be found on the northern side of the zoo. They include six West African rubber trees near the camels, two Florida silver palms near the bears and tigers, a screw pine near the boat dock, a sausage tree near the giraffes, and seven trees representing three species of figs, also known as banyans.

A Burmese rosewood Dr. Nehrling planted is not within areas the public can walk, but the tree is so tall it is visible from Goodlette-Frank Road. Danielle Green, director of gardens and grounds, says there are not many Burmese rosewoods in Naples and that they are noted for their tiny yellow flowers that bloom for just 36 hours in late spring or early summer. “Everyone anticipates it getting ready to bloom,” she says. The zoo will announce this spectacular feat on its social media platforms.

Ms. Green notes that the zoo’s diverse collection of hardwood trees, palms, and shrubs also includes plantings when Julius Fleischmann owned the property. She calls a bunya-bunya near the anteaters “quite a show stopper” and “one of the largest I’ve seen in my life,” estimating its height at 60 to 80 feet.

A royal Poinciana near the bears, also from the Fleischmann era, is so massive and wide that the zoo cables the canopy for support.

A travelers palm near the honey badger and a white bird of paradise near the clouded leopard are also very large specimens, she says.

Ms. Green says the fact that so many trees at the zoo have lasted this long is a tribute to the attention and stewardship of the owners and staff throughout the years.

“I hope that I will be remembered as a caretaker who took steps to ensure that these plant specimens are here for a very long time to come,” she says.

Tim Tetzlaff, director of conservation, adds that the zoo also protects trees around the world. The zoo plants a tree for every child who visits on a field trip and four trees for every annual membership they sell. This has resulted in more than 870,000 trees planted in Africa as part of a program that moves people out of poverty by having them plant trees, fruit and vegetables.

It’s just another example of the power of trees. ¦

» Celebrate the 150th anniversary of National Arbor Day with BOGO admission from 9 a.m. to 4 p.m. on Friday, April 29, at the Rookery Bay Environmental Learning Center and its tree-filled trails system. 300 Tower Road; www.rookerybay.org

» Audubon’s Corkscrew Swamp Sanctuary offers free admission from 8 a.m. to 1 p.m. on Wednesday, May 18, in honor of the 60th anniversary of the Natural Landmark Program, which recognizes natural sites like the sanctuary. Online tickets are required and become available May 1 online. 375 Sanctuary Road West; www.corkscrew.audubon.org/free-daynnl.